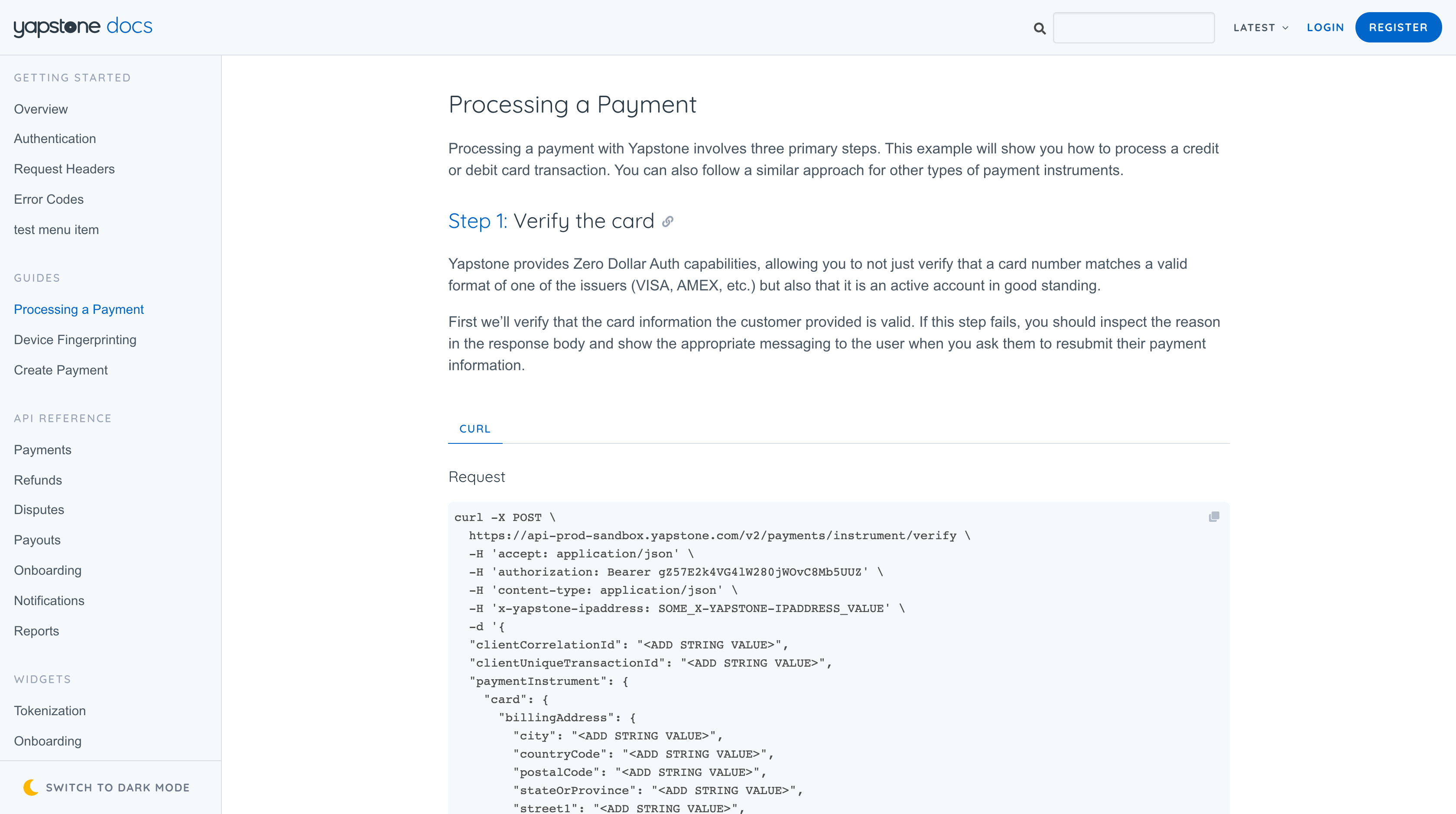 Yapstone is a large API based payment gateway that's been around for more than 18 years. As part of their new product offering, Transact, they wanted to make a new, best-in-class, experience for the potential developers who would be integrating with their APIs.

Their old process involved a technical writer working closely with developers by maintaining a giant Swagger (OpenAPI) specification of their public API. Whenever there was a new change to the spec, the writer would make the changes manually, and once approved, would upload the new document to a Drupal site which would load an external service called Apiary that would serve as their public-facing developer portal experience.

Unfortunately, this lead to a lot of user error from manually maintaining a spec, and since Apiary took a while to load, the frontend was less than ideal for a quality developer experience. Another downside to using Swagger, was that the product team couldn't make versions of the spec that would serve different use cases. For example, you couldn't have the same endpoint and show and hide parameters for a customer in the rent payment space versus a customer in e-commerce.

We came in to overhaul their developer portal pipeline and intended to solve a lot of the headaches they were having with the old process while creating an incredible developer experience. As part of this, we created a custom Swagger authoring tool called the Flavorizer, a backend Rails service that allowed developers to register and get test keys for Yapstone's new APIs, and a React app for the frontend experience.

The Flavorizer was built to take in Swagger from an S3 bucket that was automatically updated whenever there was a new release tagged in Git. Technical writers could then chose which endpoint and method they wanted to edit, and were then taken to an interactive Swagger editor where they could decorate or 'flavorize' their chosen piece of the spec. We only allowed editors to edit pieces of the spec that wouldn't break it. For example, we whitelisted the ability to edit descriptions and examples, but not change whether a certain parameter was required or not. These changes were saved in Contentstack (the headless CMS that maintained all the developer portal's content) and associated with articles on the frontend. By using this tool, editors could decorate endpoints, and hide or remove unnecessary parameters to create valid subsets of the spec. In other words, product strategists could now use the same Swagger as the source of truth, yet market to types of customers.

We also created a backend service to allow developers to register for test accounts and get test keys through Apigee – Yapstone's API gateway. These new users were also tracked as new leads for sales purposes. We wrote Cloudformation templates to deploy our Dockerized Rails app to AWS' Elasticbeanstalk.

The frontend was a Create React App that we hosted on S3 and cached at the edge with Cloudfront. We also wrote Cloudformation templates to spin up our infrastructure resources and deploy new changes to Yapstone's internal VPCs. The frontend had a bunch of interesting features like auto-generated request and response bodies, auto-generated code snippets in a variety of languages, site-wide search, and even dark mode!